"Setting off with Malcolm"

The RSW Disability Studies Working Group has arranged for the screening of the short documentary film "Setting off with Malcolm" (22 min.), by the Russian film director and activist Jerry Mercury. The director, who will join via Zoom, will introduce the film and lead a Q&A with the audience after the screening.

Dedicated to the 55th anniversary of the assassination of Malcolm X, the film elucidates Malcolm X's freeing influence on Jerry Mercury's life. Malcom X's philosophy of freedom allowed Jerry to claim his true identity as a neurodivergent person.

Sponsored by the Russian Studies Workshop, the Center for Documentary Research and Practice, and the Department of African American and African Diaspora Studies.

Hello! My name is Jerry Mercury, I'm a neurodivergent self-advocate and an artist from Russia. I invite you to watch my film-performance of 2020 "Setting off with Malcolm", dedicated to the 55th anniversary of the assassination of my hero, Malcolm X. In this film I initiate myself into Malcolm's way and die with him in order to share the light that I have received by learning his legacy. As a person who has been suffering from lots of discrimination throughout my life, by means of this ritual I wanted to decolonize my mind and become free. Soon after performing and filming it I became a self-advocate and came out as a fully dignified disabled person. I did it thanks to Malcolm X and his example of advocating for human rights and dignity, but that's another story which I will share with you later on in my film sequel, "Saffron March." Now I would like this film, "Setting off with Malcolm" to reach the American audience and thus fly over the ocean in order to return to the country where Malcolm was born. Sincerely yours, Neurodivergent Invalid Jerry Mercury 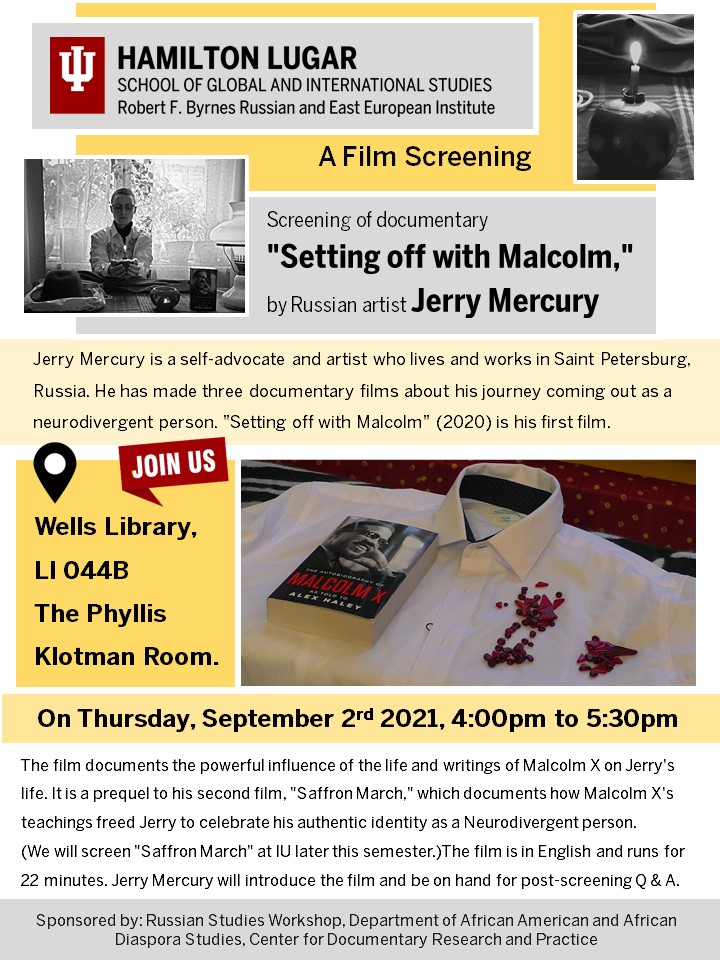