RSW Public Lecture: "Parasite Organizations: What the Evolution of Direct Sales Marketing in Russia can tell us about Contemporary Capitalism"

Direct sales organizations entered the Russian market only in the 1990s when the country opened itself up to capitalist opportunities. Originating in the middle of the 20th century in the United States, direct sales organizations (DSOs) proposed a model which was very different from anything ex-Soviet citizens were familiar with. DSOs like Amway, Herbalife, or Mary Kay embodied the principles of a “new spirit of capitalism” unlike a socialist, state-based economy: a distributor needed to build a network of buyers and sellers based on personal connections, had no guaranteed salary or social security, and earned income based solely on one’s performance. Russia’s first DSOs’ aggressive behaviour—where distributors promoted products which rarely produced their promised magical effects, resulting in numerous cases of fraud—resulted in the stigmatization of multilevel marketing in the subsequent 20 years. In the popular imagination, DSOs are still associated with sects and religious cults that brainwash their followers.  Yet, DSOs’ incomes, sales rates, and distributors, who show a high level of commitment to their corporate philosophy and declared values, continue to grow in Russia as well as in other countries. Why? Because DSOs establish a relationship with their institutional and social environment basing on parasite logic: by grasping and inhabiting already existing social forms—networks, experiences, and everyday practices—and transforming them into a means for gaining profit. The lecture will present a discussion of this idea basing on the results of sociological research conducted by the author in 2009-2016 in Russia.

Natalia Savelyeva is a sociologist and and researcher with the Public Sociology Laboratory, Centre for Independent Social Research (Russia). She graduated from Moscow State University in 2007. She subsequently received two Master’s degrees at French University College in Moscow and at the European University at St. Petersburg. She received her PhD in Social Sciences from the Institute of Sociology, Russian Academy of Science. Her research is focused on several topics: time and labor; protest movements in Russia and Ukraine; war conflicts on post-Soviet space. Among her fields of expertise are labor studies, organizational and management studies, transformations of capitalism, time and temporality, social movement studies, war studies, and biographical and narrative approaches in social science.

Register for this event   (Registration is required.) 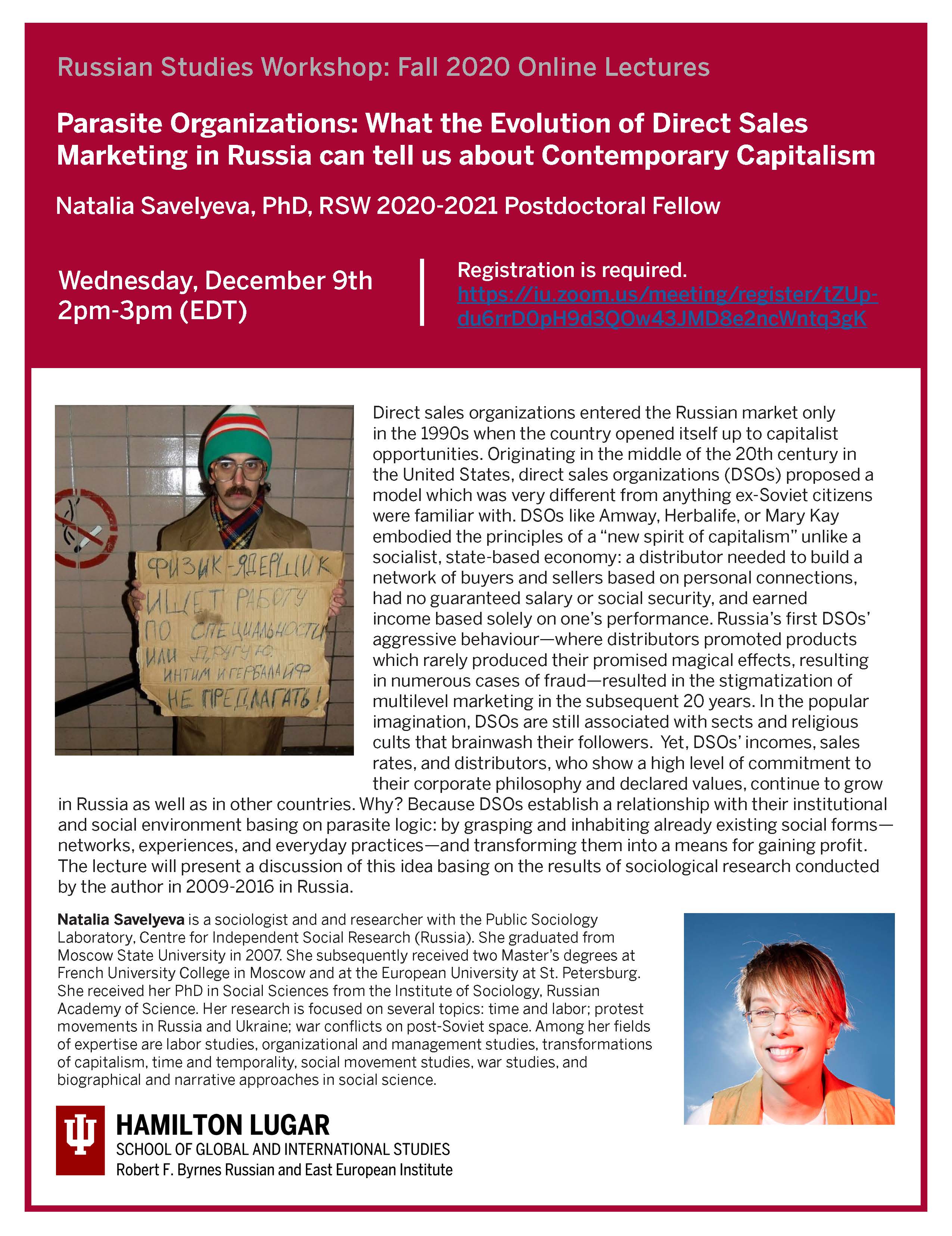