RSW Public Lecture: "Political Change in Ordered Societies: Elections and the End of the USSR"

Why do authoritarian leaders introduce multi-candidate elections? When do elections lead to a regime’s collapse? My research analyzes political reforms in Gorbachev’s USSR (1985-1991) to explore these core puzzles of comparative politics. Some scholars assert that autocrats use elections to improve control over elites; others argue that the introduction of elections results from pro-democratic international leverage. Analyzing new archival materials, I show that concerns with quality of governance also motivate reforms in autocracies. Research shows that elections can destabilize autocracies by allowing repeated coordination of opposition at the ballot box or by presenting opportunities for post-election protest against electoral misconduct. Utilizing interviews with ex-USSR deputies alongside biographical data, I demonstrate another destabilizing effect: the introduction of electoral competition disrupts informal elite networks and removes constraints that contain defection, leading to rapid regime unravelling. The implications of this work extend beyond the late USSR or contemporary Russia, as they allow a better understanding of the divergent outcomes of authoritarian stability and regime collapse throughout the world.

Dima Kortukov is a Ph.D. student (ABD) at the Department of Political Science in Indiana University. He is mainly interested in the politics of authoritarian regimes and the politics of post-Soviet states. His dissertation and other research explores how norms and informal practices alter formal institutions and which strategies the authoritarian leaders are using to remain in power. Kortukov conducted fieldwork in Russia during 2017, 2018 and 2020. His research was supported by grants and fellowships from Russian Studies Workshop (Indiana University); the Association for Slavic, East European, & Eurasian Studies; and the Institute for Humane Studies. Kortukov’s work has been published in Comparative Politics, Problems of Post-Communism, and Russian Politics. 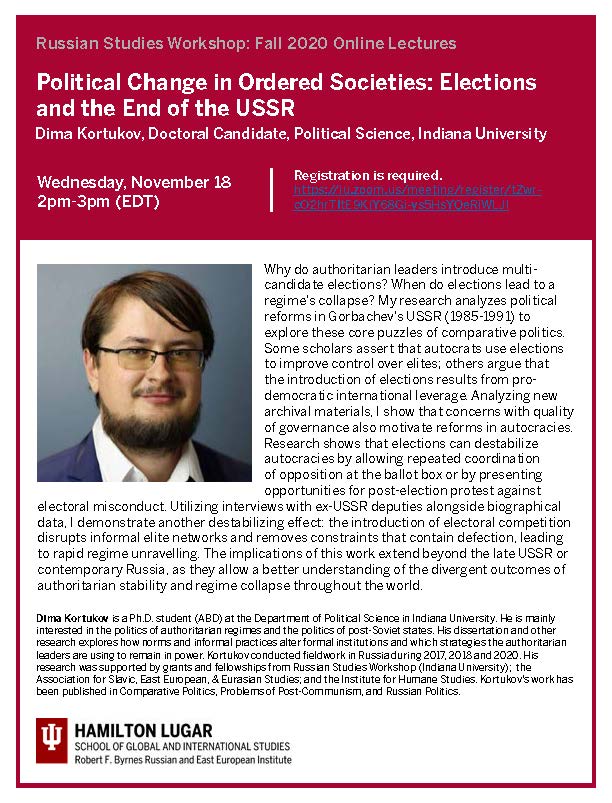